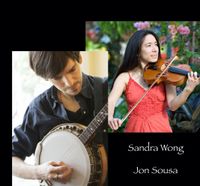 For those of our friends who are far away and can't join us live on the tiny deck, we are expanding the stage and live streaming! Join us virtually for a nature inspired concert with Sandra and Jon featuring originals and music from diverse world music cultures. Violin, Guitar, Banjo, and Nyckelharpa. The livestream link is included on your ticket and ticket receipt. 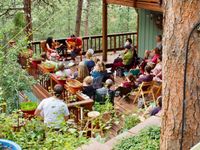 Come enjoy a nature inspired concert with Sandra and Jon featuring originals and music from diverse world music cultures. Violin, Guitar, Banjo, and Nyckelharpa. Sandra will also be offering a selection of baked goods from her bakery for sale before and after each concert. Exact address is sent with ticket receipt.

Join us as we return to Lone Hawk Farm for a rustic, yet refined evening of fine food, craft beer, wine, and cultivated song.

Celebrate a return to nature–and live performances–with late-summer renditions of Ralph Vaughan Williams’ beautifully pastoral The Lark Ascending (with featured guest artist Sandra Wong performing the renowned and exquisite solo violin part), Wilhelm Stenhammar’s September, and music from composers as diverse as Hoagy Carmichael, J.S. Bach, and Boulder’s own Bill Douglas. Margot Krimmel will also perform on celtic harp, and there will be a special appearance by composer Divya Maus, featuring a preview of Ascent: A Boulder Soundwalk.

Bio: Sandra Wong started her life journey in upstate New York, displaying a deep love of music as a youngster. She began studying the violin at age seven with the intention of becoming a concert violinist. This remained her sole focus for fifteen years, until she discovered fiddling…and her musical world was turned upside down! Since then, Sandra’s focus with her music has shifted from being an isolated striving for technical perfection to a focus on connecting other people and cultures through music as a way to build community and express our common humanity. Opening this door with an exploration of Irish, Old-time and Bluegrass music, her folk music journey has moved her into her current livelihood of teaching, performing, recording and collaborating with other musicians from a diverse range of musical genres. In 1999, Sandra opened another door when she discovered a 14th century Swedish folk instrument called the nyckelharpa and fell in love. This is a 16 stringed, keyed instrument played with a bow. It has become an integral part of her musical expression. Sandra has toured nationally and internationally as a solo artist and in collaboration with various musicians. She has appeared at numerous festivals and concert series. Her current projects include “Kaleidoscope" with Ty Burhoe and Bill Douglas; "Marrakech Express" with El Yesefi Samir, Brett Bowen and Dexter Payne, "From The Fjords to the Andes" with Victor Mestas, Gonzalo Teppa and Jill Fredrickesen; "Teresa Storch and the Sharp Eleven", “The Sandra Wong, Dominick Leslie, Ty Burhoe Trio” as well as work as a solo artist and freelance musician collaborating with musicians in all musical genres. She has released two solo albums; “It’s About Time” in 1999, and “Joy” in 2000. She recently released two collaborative albums; “Frolic and Romp” in 2009 and “Sunny Side Up” in 2010. Sandra has recorded on a number of her contemporaries projects. A complete discography is available on request. Another important aspect of Sandra’s work is education and nurturing a deep love of music and the arts in both children and adults. She teaches privately, and in group and workshop settings, and presents family and children’s concerts. Sandra also creates and personally facilitates musical study trips to different countries leading people into the heart of individual folk cultures through the music and dance of each country. A percentage of all Sandra’s CD sales and proceeds from concerts supports responsible projects working to create sustainability on our Planet Earth. In addition, Sandra also supports numerous other charitable organizations.